No, iPad auto-correct. “Afro bed meeting” is not really close to “at dinner meeting.”

If your old Furby won’t wake up or won’t start up and appears dead, you may be able to fix it in a few seconds without having to take it apart.

I recently tried to get my original 1998 Furby to work, and found that it was dead. I spent some time doing unsuccessful web searches, with none of the tips (“try new batteries”, “press the reset button”) helping. A second Furby has the same issue, and it looked like it might be related to a jammed motor, per this tutorial:

This procedure involved all kinds of disassembly, sewing things back together and hot glue. A similar YouTube video shed more light on the problem off the stuck motor:

I suspected you could just get to the motor using a small screwdriver and going in around the eye or beak, and indeed, it works. I was able to use a tiny flathead screwdriver, inserted above the beak and in to the left to gently rotate the corkscrew spiral connected to the motor a few times and within seconds, the Furby was alive again. Both units were fixed this easy, with no disassembly required.

Update: Thanks to Samuel (http://twitter.com/samsearight), we now have a photo. On my Furby, there is a corkscrew spiral gear I moved, and not this normal gear. I don’t know if the gear is also in mine or if this is a different revision. It looks easier to work with than the gear I found in mine. Thanks, Samuel!

I just read a reference to Apple’s “struggling” map software. Like many things that get “reported” in the blogosphere, they are often repeating the echo chamber of things observed or researched by others, or they are sharing one tiny sliver of experience as fact as if everyone experiences it the same way.

When it comes to Apple Maps on iOS 6, I must say, I am quite impressed. You see, there is a small connecting road on the East side of Des Moines that my 2005 Toyota Prius navigation system never knew about. It would always route many blocks out of the way to go around it.

My 2007 navigation system, likewise, also did not know about. And neither did an additional map update I purchased for it at great cost.

My 2010 3rd generation Prius navigation system also does not seem to think it exists, nor did a map update for it.

Two TomTom models, years apart, do not know it exists, even after being reported with the community “suggest corrections” feature TomTom brags about.

I believe I even tested a Magellan navigation unit to find it also did not know about this road.

Surprisingly, to me, the one map that did have it was OpenStreetMaps – the open source wikipedia of maps. Amazing that they knew about this road, while Google, Navtec, TomTom, etc. did not seem to believe that it existed — even though it had been there for ages.

Google, today, does show this section of the road, but I believe that was not the case a few years ago.

And Apple Maps also shows it. Not only that, but Apple Maps can correctly navigate me from my housing area to the Main Street without jumping me through the forest nearby like everything else does. None of the systems I have used had the connecting driveway that links my area with the road, so they often jump to the closest pavement they can find, which is over the river and through the woods.

Apple Maps is the first map software I have used that correctly pinpoints where I live, and knows how to get there without just getting close.

So from my perspective, it’s a huge improvement over many other maps I have used and reviewed over the years.

But your milage may vary. 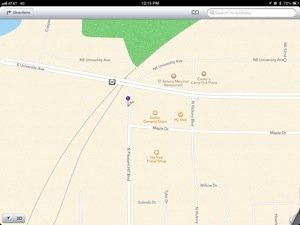